With our API’s query logs, with a ground truth by train specialists in Belgium, and with user feedback, we can show you how busy your train is. The only thing lacking to realizing this feature that the Dutch already have for years, is your support! Go to spitsgids.be and get a seat on your next journey.

We are launching https://t.co/oTBd1vhc52 (NL): let's crowd-fund how busy your @NMBS train is and make sure you always have a seat! #opendata

Time flies! But we have great news:

We can now officially close the era where iRail has been an advocacy group for Open Transport Data, and instead become something we have always wanted to become: a Living Lab (and/or hackerspace) to work towards a  better transport experience for travelers in Belgium. The next steps are going to entail a better collaboration with players like TreinTramBus, iMinds, the European Passenger Federation and everyone who has can help us reach our goal. A first thing is going to be announced next Monday, the 18th of April! We are quite psyched about this.

TreinTramBus and iRail have already been working together in the past, analyzing the query logs we have published in collaboration with iMinds’ Data Science Lab (my current employer). The research that has been carried out was presented at the WWW2016 conference in Canada, during the USEWOD workshop. The full paper can be downloaded here.

We are only two weeks in 2016 and it seems like NMBS/SNCB is keeping its promise as a presentation announced they now have an internal innovation project on Open Data. But more interestingly for us, the presentation, geving yesterday at the Digital Agenda Belgium event, announced they were wrong in 2010 sending Yeri a cease and desist letter. While people on twitter responded moderately (“How long is this going to take?”, “How about real-time data?”) we believe this is a huge step forward: it is the first time the NMBS/SNCB acknowledges we were on the right side of history. What iRail is concerned: we would love to start collaborating on a clean slate

It doesn’t stop there, today, we are featured in De Standaard with a piece on how NMBS should make use of their data in a better way: 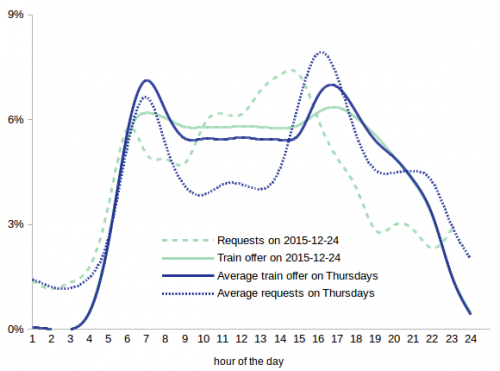 Train offer vs. Travel Intentions on average on a Thursday and on December 24th

Indeed: the query log files of iRail can be used as an indication of travel intention. You can now also reuse the log files yourself:

Today, the Belgian railway company announces a data sharing program for third party developers. They will start sharing the planned schedules (“static data”). We are cautiously excited that this is the first step towards a real open data policy.

You can request your own 1-on-1 contract via http://www.belgianrail.be/nl/klantendienst/infodiensten-reistools/public-data.aspx. We hope to make our own version, linked to our identifiers, available through http://gtfs.irail.be soon!

What does this mean for the end-users?

Companies like Google, Nokia, Microsoft and others can now start reusing the data if they negotiate a one on one contract. Starting today, you will see route planners from third parties work with NMBS/SNCB! Android and Google Maps users will be very excited as they now will also see trains suggested to their destination instead of only buses when selecting public transit.

Why isn’t this open data yet?

For once and for all: data sharing = you can negotiate 1 on 1 contract. #opendata means open for everyone – http://t.co/7YcaUph3Io @nmbs

Open Data means that there’s no discrimination in who can reuse that data and that there’s no restrictions in in what way it can be used and redistributed. For now, you can access the data after signing a 1 on 1 contract. We think it’s a good thing NMBS/SNCB is testing the water before the law that will oblige NMBS/SNCB to do real open data comes into action in 2016. We look forward working together and iRail is as well in the process of requesting a license. We however want to be able to republish the data once we added our data to the dataset, which now isn’t allowed by default.

Why is iRail (cautiously) happy?

We once were forced to stop building applications using the data of NMBS. The original posts from 2010 can still be found in our archives. Today, the first steps towards Open Data have been taken and we are sure they will not regret it. We will slowly migrate our servers to make use of this official dataset. We look forward to seeing you build awesome new things with this high quality data!

Today is the day that the minister of the Digital Agenda Alexander De Croo announced to create a law before the summer that will oblige NMBS/SNCB to open up their data.

UPDATE: More info on the PSI directive and this tweet can be found here: 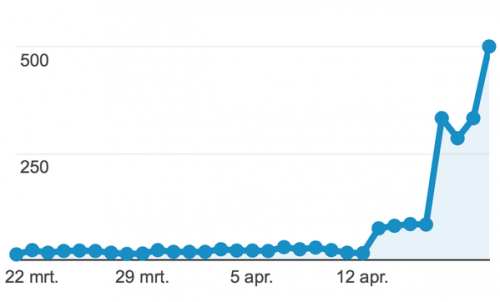 In the past few days, we’ve got a lot of questions whether iRail will keep existing and what the impact of railtime disappearing will be on the iRail webservices.

Answer: iRail will keep existing and will keep publishing realtime data through http://api.irail.be. iRail has already moved away from railtime a while ago.

We have news from the app front: the guys behind Next Train in The Netherlands have expanded their app for the smart watch Pebble to Belgium. ‘Next Train’ shows the time remaining until departure of your train on your Pebble smart watch. As soon as you open the app it starts counting down to the first train home from the current nearest station. When it detects you are already home it shows the departure to your second favorite station – for example your work. You can select later departures and other near and favorite stations with a single click.

‘Next Train’ was introduced in The Netherlands with the launch of the Pebble app store at the beginning of this year. By integrating the iRail API, Belgium becomes the second country where your can plan your complete train journey from your wrist.

Interesting to note is that the Next Train team was very happy to work with the iRail API, saying it’s “very accessible and pleasant to work with”. Well, the pleasure is ours too!

This is a great video on Open Data at SNCF. On the 21st of October the SNCF is doing an internal hackathon on which two iRail members are invited as mentor. More data on the SNCF can be found at http://data.sncf.com.

SNCB, we would love to do these projects in Belgium as well!

It goes without saying, the NMBS/SNCB (don’t mix them up with Infrabel or NMBS/SNCB Holding) and iRail haven’t been the best friends over the past 4 years. But we do not really worry about it: they are even fighting with Infrabel, the railway operator, over who owns the data*, and even the biggest organizations and research groups in Belgium scrape the data from their website.

Bad news! The 3d of October, the railway people are on strike. As usual with these strikes no one understands exactly why, and if we dare to ask why, the commuters are too selfish.

But, we have good news as well. Thanks to the fact of the strike, we can now publish a dataset of 1 full day. We have created a GTFS (General Transit Feed Specification) which contains all the schedules for October the third. We are accepted through all the tests and we got published at the official GTFS Data Exchange website.

And we have a call for participation! If you are a developer, a graphic designer, an artist, a producer, an author, basically anything, wouldn’t you like to participate in our 3d of October take-over iRail.be contest? Make a website, send us the code, get published on iRail.be on the 3d of October!

* For your interest, transport data is not copyrightable. Therefore, there is no such thing as a transport data owner. The railway companies should realize that they are responsible for getting people from one place to another and the other way around. This includes providing people with the correct data, something SNCB/NMBS has always refused to do.